"A small orchestral ensemble led by a married couple. As likely to play churches and public libraries as concert halls. Often lumped in with the overcrowded and increasingly irritating ‘nu folk’ scene. Compared to Vaughan Williamsand Benjamin Britten, probably because they’re the only English classical composers we pop critics have heard of. Have made two previous albums which used poetry by the likes of Chaucer, Hardy and Tennyson instead of pop lyrics. Occasionally sound like the music Oliver Postgate used to backdrop Watch With Mother. They feature a bassoon. North Sea Radio Orchestra really should be smug, boring and irrelevant. So how do they make this stuff so exciting? 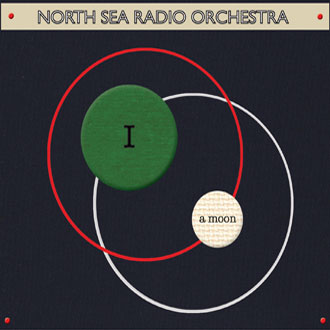 The third NSRO album sees Craig and Sharron Fortnam changing tack in subtle but significant ways. The old poets have been sidelined in favour of self-penned lyrics that neatly reflect their very English sense of melody and the female Fortnam’s light, sad, pretty, folkie-meets-chorister voice. The title-track, with its spooked electronic music box feel, provides the lines that define the mood: "I a moon orbiting myself / Sometimes gravity pull me close." The words throughout the album feel like the thoughts of someone so outside of the real world that they can hover above themselves, watching their own futile attempts to connect, like a child watching ants and pondering whether to drown them. This alienated, superior feel is contrasted by the sheer beauty of Craig Fortnam’s melodies, which have that knack of suddenly shifting to the one chord available that can make spines tingle and toes curl with pleasure.

Meanwhile, the arrangements wear their classical and ancient folk influences so lightly that a track like Berliner Luft can find itself sounding like Neu!without need of drums nor electric guitars. The overall effect makes I a Moon feel like the world’s first baroque-Krautrock-folk-rock Kate Bush-electro-pop album. But more than all that, it is genuinely very beautiful". BBCMusic

"Some have suggested that North Sea Radio Orchestra look at the world through sepia-tinted glasses; that their chamber combinations of woodwind, keyboards, strings and Sharron Fortnam’s pure-toned voice reek of old English parlours; that they are excessively nostalgic.The fundamentally forward-looking music of I A Moon refutes that facile argument. Fortnam might sing, “We are sitting in a row/Looking over England/Watch the evening go,” on “The Earth Beneath Our Feet”, but play the song next to something by Vaughan Williams or Benjamin Britten, and you can immediately hear where they part from their admitted influences.

At times guitarist Craig Fortnam’s compositions do tap into folk memory, most obviously on “Heavy Weather”, with its sea shanty refrain of “Heave-ho/Down below”. But over a tolling four-to-the-bar piano figure he weaves in bassoon, bass clarinet, tuned percussion, strings and twinkly synths over its eight minute course. Its inspired arrangement has some overlap with Clogs, Art Bears, Pentangle and Penguin Cafe Orchestra.

The album’s real surprise is “Berliner Luft”. With its acoustic guitar strum and drum machine, it sounds like something off Harmonia’s Musik Von Harmonia, until it gains more substance through a series of agitated, almost Zappa-esque wind and tuned percussion themes. North Sea Radio Orchestra might share with Britten and Vaughan Williams a kind of haunted melancholy that has come to be seen as characteristically English, but their music couldn’t have come from any other century than the 21st". The Wire

I dreamt a dream! What can it mean?
And that I was a maiden Queen
Guarded by an Angel mild:
Witless woe was ne’er beguiled!

So ponders the metaphysical poet William Blake in ‘The Angel’, the lyrical inspiration for North Sea Radio Orchestra’s second album Birds, a time machine journeying between two different worlds. And what a journey. The heavy classical orchestration would seem to cast the Orchestra out of the present; the accessible song structures manipulate the tracks into contemporary and understandable forms.

The literary content has been dumped for a more personal insight in third effort I A Moon. NSRO have become metaphysical poets in their own right as an almost angelic voice (think of a restrained Kate Bush) kindly proclaims from above: “We don’t need our bodies anymore / we don’t remember what they’re for / we are the earth beneath are feet / we are the things we want to believe,” in ‘The Earth Beneath Our Feet.’ No other statement could represent NSRO’s objective more truly, a personal dimension of dreamlike domestication. Even live there’s always been mysticism to the London orchestra. From the sanctimonious surroundings of churches to quaint libraries, there’s always been a feeling that NSRO's pastoral chimes came out of a classic novel. Add the greater electronic emphasis of I A Moonhere the novel transforms into a fairy tale.

So it’s with ‘Morpheus Miracle Maker’ and ‘Heavy Weather’ that we begin the first chapters of this tale. The album’s spine is based on swanning strings, often trickling in at later points to guide the rest on their final journey, but with all the instrumentation being so carefully considered and layered, there’s never the sense that any instrument hogs the show. In the 'Morpheus...' guitar strings pluck as they dance around in a jolly fashion and the violins create a gentle draft of air which eventually catches the shimmering synths that circle around in an innocent enchantment. And 'Heavy Weather' has the foreboding quality of the Brothers Grimm, the choral vocals almost breathless. In amongst the lonesome strings, the fragmented voices try to grasp for a more complete voice but drop back into the ether as they fail to gather the energy to stay with the wind of the lonesome violin. When we get to ‘Morpheus Drone’ there is nothing left but a melancholic string waltzing around without a partner, the glistening background noise setting a reminder as to what there was and what isn’t anymore.

But don’t be sad, all hope is not lost. The twee-tastic ‘Ring Moonlets’ and ‘Mitte Der Welt’ both ponder in intermission with dripping synths and guitars both honey suckling into a gingerbread house of sweet optimism. The journey isn’t over yet.  Drowned In Sound

I a Moon is available from Amazon, Itunes and Google Play