"The beauty of NSRO's music is that it feels like a core sample drilled down through the last few hundred years of music, revealing traces of Purcell, Victorian parlour music, Britten, sea shanties, and krautrock. This blend of ancient and modern was reflected more overtly on their previous album I A Moon, but their flowing - if occasionally knotty - music sounds particularly inspired on Dronne." Prog Magazine 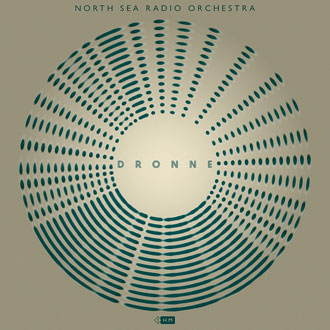 "It’s been five years since North Sea Radio Orchestra’s last release, I A Moon, a beautiful album of chamber pop that added touches of krautrock to their classic English melodicism. During the intervening years, composer and lead guitarist Craig Fortnam released a solo album under his Arch Garrison monicker and also directed and arranged the music of Robert Wyatt for a performance at the Nuits de Fourviere Festival in Lyon with the NSRO as in-house band. With ex-Cardiacs keyboardist William D Drake and ex-Henry Cow/National Health bassist and singer, John Greaves, added to that mix, it’s hard to imagine a more appropriate group of musicians to represent Wyatt’s music.

According to Fortnam, the main effect that working on the Wyatt project had on his own songwriting was in treading the fine line between spontaneity and composition whilst maintaining a sense of freedom within the original arrangements. This approach bears wonderful results on their cover of ‘The British Road,’ from Wyatt’s Old Rottenhat. Keeping Wyatt’s central melody intact, the NSRO version ups the tempo to an anglicised Neu-like chug, whilst adding glorious layers of strings, bassoon, clarinet, piano, synth, vibraphone and glockenspiel. It’s a beautiful, life-affirming moment. Like all the best covers, succeeding in improving on the original by simultaneously expressing respect and doing its own thing. It’s a clear highlight of the album, although far from the only one. Opening track, ‘Arcade,’ subtly reveals its serene melody with easy grace, effortlessly evoking imagery of nature’s springtime return, petals opening and water running clean through brooks and streams. In the gently chiming ‘Vishnu Schist,’ Sharron Fortnam’s lovely emotive vocal adds an element of uncertainty undermining its lullaby quality when she sings: “In God we trust/to take you in and keep you safe and warm/Like he never did when you were here on Earth.”

Although in the past the NSRO have been lumbered with such labels as ‘new folk,’ or even worse ‘prog folk’ or ‘modern pastoral,’ it makes more sense to place them in the context of a ‘post Cardiacs’ scene, alongside Knifeworld, Stars In Battledress, William D Drake and The Gasman. Not in the sense of aping the original, but in their shared aspirations of writing intense music driven by the most sublime of melodies. If anything, NSRO share a similar aesthetic to the Drake and Smith Sea Nymphs side-project, albeit without the willful eccentricity, whilst still making a sound unmistakably their own.

At eight minutes long, the title track, ‘Dronne,’ is an ambient epic at the centre of the album. Almost entirely improvised, swathed in synths, organs and bells, its two unrelated chords eventually coming together in a massive melody of almost overwhelming proportions. The track grew out of a piece originally composed for a funeral, an accompaniment for the soul whilst journeying into the Great Cosmic Unknown. True to the usual NSRO magic, the piece becomes celebratory in nature, rather than steeped in sadness. ‘Alsace Lorraine’ twines the voices of the two Fortnams, together to lovely effect, at once both wistful and hopeful. The large-scale instrumentals ‘Dinosaurus Rex Parts 1 and 2’ end the album on an emotionally strong high note. The kind of gently pulsing effect found in the works of Steve Reich giving way to neoclassical strings and a playful fairground organ melody that wouldn’t be out of place as the soundtrack to a BBC television show about British nautical history. One final coda follows and then its over, all too soon it seems. All things told, this is a gorgeous album from start to finish, without a weak track amongst its number.

"Despite, or perhaps because of the subtlety of its sounds and construction, it’s a recording capable of repaying repeated listens manifold. The airy and natural textures it evokes makes it a perfect soundtrack for the changing seasons as summer dwindles into autumn and the leaves on the trees begin to turn to shades of russet and yellow, magenta and orange". The Quietus

"Craig Fortnam's contemporary electronica and chamber-music project has spawned just three albums since its inception in 2002, fusing cyclical classical sounds with alternative folk and jazz time-signatures, a sort of Penguin Cafe Orchestra, Soft Machine and Chris Morphitis on a slow boat to the Scottish Isles via the South Downs.

Dronne is the band's fourth long-player and possibly their most realised and consistent. Elegiac arrangements dominate the first few pieces with Vishnu Schist recalling the second half of Kate Bush's Hounds Of Love or her 50 Words for Snow and the opening Arcade turning into a sweeping widescreen overture for the setting sun.

The closest we come to a determinable song is the motorik The British Road which is driven by a slight syn-drum, sweet harmonies and a feast of strings. I can imagine this translating very well in a concert setting such is its gradually unravelling bent. There's also a radio edit included, suggesting NSRO are as keen on it being a single as I am. Given that it's an exquisite Robert Wyatt cover (Fortnam's got previous with Wyatt - he performed his work at a French arts festival in 2014), that's no shock at all.

There's also some acoustic guitar wizardry, light and airy folkisms, Krautrock leanings (particularly on the glistening and hypnotic title-track) and eccentric psychedelia (very Cardiacs in places) on Dinosaurus Rex, proving that once again, North Sea Radio Orchestra have enough idiosyncrasies in their locker to satiate most fans." Flipside

Dronne is available from Amazon, Itunes and Google Play